PURCHASE, New York, May 9, 2019 /PRNewswire/ — #FORTHELOVEOFIT — UEFA and Pepsi® have announced Imagine Dragons as the musical talent to perform live at the 2019 UEFA Champions League Final Opening Ceremony presented by Pepsi. The Grammy Award-winning rock band known for smash hits including ‘Believer,’ ‘Radioactive‘ and ‘Thunder’ will take the stage minutes before kick-off at the Metropolitano Stadium in Madrid on Saturday, June 1st. 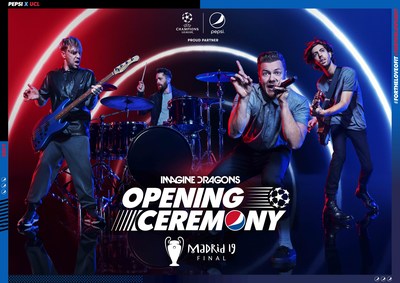 Named Spotify’s most-streamed group for 2018 and boasting a fan-following all over the world, Imagine Dragons will rock the stadium with their signature sound and energy, building an electric atmosphere and getting fans buzzing before kick-off.

Now in its fourth year, the UEFA Champions League Final Opening Ceremony presented by Pepsi merges the worlds of music, entertainment and sport with a high-energy performance by music’s biggest, global acts. Fresh off of last year’s record-breaking performance by pop sensation Dua Lipa, the hotly-anticipated 2019 Opening Ceremony will feature a level of production never seen before at a UEFA Champions League Final. With stunning pyrotechnics and special effects, fans will be treated to a visually spectacular and immersive musical performance.

Dan Reynolds, lead singer for Imagine Dragons, said: “We’re honored to be playing the UEFA Champions League Final Opening Ceremony with Pepsi for some of the most passionate sports fans on the planet. It’s going to be a great show in Madrid.”

This year’s Final will be played at the Metropolitano Stadium in Madrid on Saturday, June 1st and will air in over 200 countries and territories around the world, while the UEFA Champions League Final Opening Ceremony presented by Pepsi will take place just over 10-minutes before the biggest game in European club football this season gets underway.

“As a brand with a legendary history in both music and football, there is nothing bigger or better for Pepsi than the UEFA Champions League Final Opening Ceremony. Partnering with UEFA to bring live entertainment to the Final is an epic way to go all in for the passions we – and our fans – love,” said Natalia Filippociants, Vice President, Marketing, Global Beverages, PepsiCo. “Each year, we have raised the performance bar and the energy in the stadium minutes before kick-off. And to be able to bring today’s ultimate rock band, Imagine Dragons, to the stage with us for what is sure to be an electrifying Final, is a true celebration of where this partnership has come – and where it is going.”

Guy-Laurent Epstein, UEFA Events SA Marketing Director, commented: “We are extremely excited to be collaborating with Pepsi on the 2019 UEFA Champions League Final Opening Ceremony. For the fourth year running, the Opening Ceremony will bring music, entertainment and sport together in an epic experience for fans – and Pepsi is the perfect partner to help us do that. Last year’s performance by Dua Lipa was a great success, breaking records as our most-viewed, single piece of social media content ever. We know that Imagine Dragons are going to build on our fan’s excitement for the Opening Ceremony performance with a rock show football fans will never forget.”

Alongside the brand’s continued sponsorship of the UEFA Champions League, Pepsi launched its international FOR THE LOVE OF IT™ tagline and platform earlier this year, with a global campaign starring Leo Messi and Mohamed Salah bringing to life the brand’s love of football and showing just how far people will go for the delicious taste of Pepsi.

In addition, Pepsi will be hosting fans at the UEFA Champions Festival in Madrid, which will help to build excitement ahead of the match. The festival is open to the public and will showcase a number of musical acts across four days, with headline performances by popular EDM act Dimitri Vegas & Like Mike on Friday, May 31st, and the international pop group behind this year’s new Pepsi jingle, Now United on Saturday, June 1st.

For more information, visit www.facebook.com/uefachampionsleague and the official Pepsi Facebook pages around the world. Join the conversation online with #FORTHELOVEOFIT.

About PepsiCo
PepsiCo (NASDAQ: PEP) products are enjoyed by consumers more than one billion times a day in more than 200 countries and territories around the world. PepsiCo generated more than $64 billion in net revenue in 2018, driven by a complementary food and beverage portfolio that includes Frito-Lay, Gatorade, Pepsi-Cola, Quaker and Tropicana. PepsiCo’s product portfolio includes a wide range of enjoyable foods and beverages, including 22 brands that generate more than $1 billion each in estimated annual retail sales.

Guiding PepsiCo is our vision to Be the Global Leader in Convenient Foods and Beverages by Winning with Purpose. “Winning with Purpose” reflects our ambition to win sustainably in the marketplace and embed purpose into all aspects of the business. For more information, visit www.pepsico.com