SEOUL, South Korea, Nov. 15, 2022 /PRNewswire/ — A Korean startup recognized for its global growth potential won the Platinum Prize, which is the highest award, at the 3rd Asia Edtech Summit (AES) Global Award held in Tokyo on November 1, 2022. This company received high scores on evaluation items such as novelty, reliability, usefulness, application of technology, and business promotion. Having been thus honored, the company is now attracting greater attention in the industry. 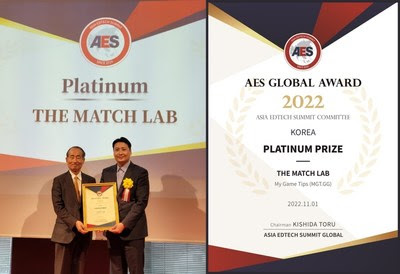 The company that received this award is The Match Lab (CEO Byun Sungchul).

The Match Lab, a member of the Born2Global Centre (CEO Kim Jong-kap) and one of the most trusted startups in the Korean esports education industry, was co-founded by CEO Byun Sungchul, a first-generation professional gamer, game team coach, and global esports event organizer who has been building his career since 1999, and CGO Won Youngju, who has been working as a cultural content creator and education planner for over 15 years.

“MY GAME TIPS /mgt.gg” is a coaching tool and gamer edtech solution that has been researched and developed for two years based on the established expertise of an offline academy that trained amateur gamers to become professionals. Just by browsing their nickname in the game, users can be evaluated of their game skills and weaknesses and recommendations of appropriate video content containing tips from professional coaches.

In particular, optimized tips in video are produced after extracting specific replays using Search tool that enables coaches to search for desired condition data. After the completion of internal testing, this video content will be linked with the coaching tool.

MY GAME TIPS /mgt.gg, officially launched on September 13, was used for a data coaching program that was created for advanced gamers wanting to start a career as an esports coach in July and August of this year. In the initial research phase in 2020 and 2021, we applied our data coaching program to data analysis, coaching, and player selection of the Tier 1 professional game teams in Korea, Turkey, and Vietnam. In doing so, we conducted various experiments to provide realistic coaching solutions.

The Platinum Prize gave The Match Lab an opportunity to expand its education services from game generation to the educational ecosystem, going beyond esports. Starting next year, the company plans to cooperate with game teams, universities, and international organizations to advance into the global market.

The Match Lab has also operated an esports lab academy certified by the Ministry of Education with the goal of enhancing gamers’ ability through the identification of problems and development of problem-solving technologies. The company became a member of the Born2Global Centre in Pangyo in 2022 and is promoting the advancement and global expansion of “mgt.gg,” its edtech solution for gamers.

The Born2Global Centre, operated by Born2Global, is a full-cycle service platform that supports the global expansion of promising companies. Established in 2013 under the Ministry of Science and ICT, Born2Global has been setting the standards for a successful startup ecosystem in Korea and continues to expand and transform startups so that they are engaged, well equipped, and connected with the global market.