ADEN, Yemen, Dec. 31, 2019 /PRNewswire/ — His Excellency the Prime Minister of Yemen, Dr. Maeen Abdulmalik Saeed, welcomed the Saudi Development and Reconstruction Program for Yemen (SDRPY) delegation headed by Projects and Studies Director Eng. Hasan M. Alattas to the presidential palace in the temporary Yemeni capital, Aden, to identify ways of implementing development projects in line with the Riyadh Agreement economic development track. The head of the Yemeni government gave assurances that this essential visit would have a major impact on account of the delegation’s size, agenda and timing. 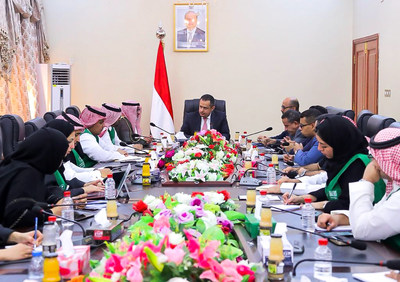 Prime Minister Maeen Saeed said that this visit would have very significant implications for every Yemeni, noting that the Kingdom was a partner to Yemen in peace and in times of distress, gave Yemenis hope for stability, and supported peace in all parts of Yemen.

“Two years ago, the Custodian of the Two Holy Mosques King Salman bin Abdulaziz and His Excellency President Abdrabbuh Mansour Hadi held their first discussion on strengthening Yemen’s economy with a USD 2 billion deposit, a grant of oil derivatives, and other reconstruction and development initiatives,” said H. E. Maeen Saeed, indicating that the Saudi deposit had played a major role not only in financial stabilization and support for the exchange rate of the Yemeni rial to the US dollar in a country that had witnessed war for five years.

“The deposit also helped the Central Bank of Yemen and opened financial letters of credit for commodities that have reached every home in Yemen, and many remain unaware of this.”

The prime minister praised SDRPY’s ever-evolving efforts, noting that the government of Yemen and the program were holding regular meetings and working closely together. He acknowledged several visits to the airport and port of Aden by SDRPY to assess development needs, and he assured Yemeni citizens in Aden and other provinces of a quick and positive outcome from the program’s development and reconstruction projects.

For his part, the head of the program delegation, Eng. Hasan M. Alattas, gave an overview of the meetings his delegation had held with Yemeni government officials in various sectors, in addition to the agenda of upcoming meetings to discuss urgent and immediate needs and priority projects. The parties also exchanged updates of the latest developments in ongoing SDRPY projects, including the King Salman Medical and Educational City and Marib Airport.

The SDRPY delegation described the second day of its activity as occupied with meetings at various government agencies aimed at coordinating needs assessments and project monitoring in Aden with the Yemeni side. In support of the health sector, for example, SDRPY made exploratory visits to Aden General Hospital, which is being rehabilitated and funded by the Saudi Fund for Development under SDRPY supervision.

On its first day, the program’s delegation had met with officials from Aden’s roads and public works sectors and been briefed by the Yemeni side on priorities for improving the delivery of basic services to citizens and facilitating their travel, including road resurfacing and lighting. These officials indicated that the program’s projects were strengthening the transportation sector in a number of Yemeni provinces and bearing witness to the Kingdom’s support for development in Yemen. They pointed out that SDRPY was the first development organization working to improve services and rehabilitate roads in the Yemeni province of Al-Jawf.

On the second day the SDRPY delegation met with public education officials in Aden. The meeting addressed challenges facing the education sector and ways of overcoming them to achieve sustainable development and uninterrupted educational services. Both the Saudi and Yemeni sides emphasized the importance of helping teachers and remaining attentive to the need for a healthy learning environment for students. The SDRPY project to print curriculum schoolbooks, which had already been distributed in several provinces, was a case in point.

The two sides discussed the establishment of several schools, the rehabilitation and restoration of others, and completion of a group of outstanding projects in the province. They also exchanged ideas for addressing teacher training and school office renovation needs.

The Saudi delegation also met officials from the Cleaning and Improvement Fund. During the meeting, the urgent requirement for equipment and machines to transfer refuse to municipal dumps was reviewed. The parties deliberated a number of development initiatives to enhance the spirit of cooperation among community members regarding the state of school buildings, and to address special needs in the area of rehabilitating parks and public roads.