NEW YORK, March 3, 2020 /PRNewswire/ — Today, the world’s number one snack brand, Lay’s is launching its 2020 football campaign with a star-studded, high-energy, commercial featuring three titans of the beautiful game. The focus of the campaign is to celebrate Lay’s ongoing partnership with the UEFA Champions League, which runs until 2021. 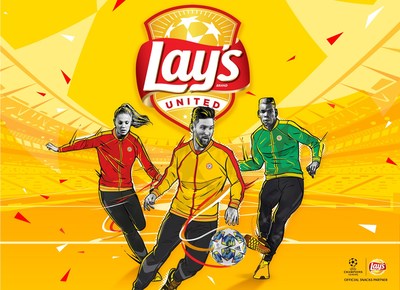 The 60 second spot sees six-time Ballon d’Or winner Lionel Messi, world champion Paul Pogba and UEFA Women’s Player of the Year 2017 Lieke Martens get extraordinarily distracted by the mouth-watering sound of a fan opening a bag of Lay’s, just seconds before a match is about to kick off. The moment the stadium hears the crunch of the first chip, heads swivel away from the game as fans are drawn to the delectable bag, kicking off a race to the delicious chips, while high-energy 50’s swing music begins to play.

Not to be left out of the action, the players join in, going above and beyond to get their hands on the enticing bag of chips. Pogba sprints across the field and climbs over stadium rows, Martens leaps from her pundit’s chair and out of the studio window, and Messi finally gets his hands on a chip by hanging dramatically from a stadium skycam.

Lionel Messi said: “As always, it’s a pleasure to be part of this year’s Lay’s campaign. I have partnered with Lay’s for many years and each year they surpass all expectations. The idea of hanging from a skycam to get my hands on a bag of Lay’s is certainly an original stunt.”

Lieke Martens said: “Filming the Lay’s advert was a great experience. I love Lay’s spirit of fun and joy which I see truly connect to football. I’m excited to be a part of the wider campaign as well and I really hope fans enjoy it.”

Paul Pogba commented: “I was thrilled to be involved in the Lay’s football campaign for the first time. It’s a fun, upbeat advert, and I love the music that’s playing over it. I even break out in a little dance when I’m the first to get my hands on a chip!”

In addition to the commercial, Lay’s captured some exclusive on-set moments with each football player. The behind-the-scenes videos prove that even a stray football can’t distract from a delicious bag of Lay’s.

Furthermore, Lay’s will see its iconic bags transformed with special edition UEFA Champions League designs, with each football star having their own limited-edition packaging.

Sebnem Erim, Vice President, Marketing, Global Foods, PepsiCo commented: “We know that Lay’s and football are two things that always bring people together. This year, we wanted to step up the energy and demonstrate what could happen when a bag of Lay’s brings a whole stadium together at a UEFA Champions League match. This campaign brings Lay’s qualities to the forefront and highlights just how far people, even world-class footballers, will go to get their hands on the world’s most popular snack!”

In addition to the new commercial and limited-edition bags of Lay’s bags, there will be new player themed point of sale materials, as well as social content, and OOH support for the campaign. Join the conversation online with #LaysUnited.

About PepsiCo
PepsiCo products are enjoyed by consumers more than one billion times a day in more than 200 countries and territories around the world. PepsiCo generated more than $67 billion in net revenue in 2019, driven by a complementary food and beverage portfolio that includes Frito-Lay, Gatorade, Pepsi-Cola, Quaker and Tropicana. PepsiCo’s product portfolio includes a wide range of enjoyable foods and beverages, including 23 brands that generate more than $1 billion each in estimated annual retail sales.

Guiding PepsiCo is our vision to Be the Global Leader in Convenient Foods and Beverages by Winning with Purpose. “Winning with Purpose” reflects our ambition to win sustainably in the marketplace and embed purpose into all aspects of the business.  For more information, visit www.pepsico.com