PURCHASE, New York, Feb. 12, 2019 /PRNewswire/ — #FORTHELOVEOFIT – Today, Pepsi® premieres its 2019 global football campaign under the brand’s new international platform and tagline, PEPSI, FOR THE LOVE OF IT. Encouraging people to go all in for the things they love, FOR THE LOVE OF IT is brought to life through the brand’s passion of football – which has been at the heart of Pepsi for decades. Across the brand’s trademark, this year’s campaign celebrates the brand’s ongoing partnership with the UEFA Champions League, with two of the world’s best footballers together for the first time, facing off in true entertaining Pepsi style. 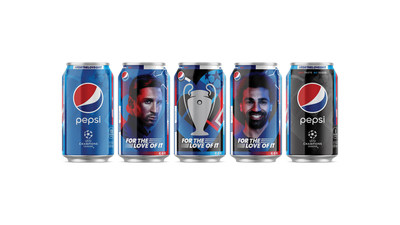 Featuring four-time UEFA Champions League winner, Leo Messi, and record-breaking forward and “Egyptian King,” Mohamed Salah, this year’s creative, “Last Can Standing,” sees the two iconic forwards engage in a playful duel of passion and entertaining technique for one of life’s favorite refreshments – a delicious Pepsi. As the pair pull up to a remote petrol station they discover there is only one can of Pepsi left in the fridge. What quickly unfolds is a series of action-packed trick shots and skillful challenges as they go head-to-head for the coveted cola.

“It was a lot of fun to film this year’s commercial with Pepsi – it’s a concept with fun and football skills at the heart of it. I hope this year’s campaign continues to encourage football fans to embrace their passion and love of the game,” said Leo Messi.

“I’m very happy to see the partnership with Pepsi turn global, and I’m excited for what lies ahead,” said Mohamed Salah.

Beginning today through the lead-up to the UEFA Champions League Final in Madrid, 65 countries around the world will be rolling out this year’s suite of football creative, including exclusive content, as well as design-led packaging, out of home and in-store point of sale, across Pepsi and Pepsi Black / MAX. While filming the 2019 campaign, Pepsi captured some amazing behind-the-scenes moments with Messi and Salah. As expected, these athletes’ feet are never far from a ball and Pepsi kept the cameras rolling to capture their unmatched skills – both pitch and Pepsi-focused. The content will be shared exclusively on social channels.

“Year-on-year, Pepsi goes all in to entertain football fans and showcase the game’s heroes in surprising and unexpected ways,” said Natalia Filippociants, vice president, Marketing, Global Beverages, PepsiCo. “The new FOR THE LOVE OF IT platform is our rallying cry and connects all we do. As a brand we have authentically loved and harnessed our fans’ passion for football for decades. This year’s campaign realizes fans love for the unexpected in the game; and brings together the sport, players and beverage people all around the world love.”

Pepsi is a proud sponsor of the UEFA Champions League.

About PepsiCo
PepsiCo products are enjoyed by consumers one billion times a day in more than 200 countries and territories around the world. PepsiCo generated approximately $63 billion in net revenue in 2017, driven by a complementary food and beverage portfolio that includes Frito-Lay, Gatorade, Pepsi-Cola, Quaker, and Tropicana. PepsiCo’s product portfolio includes a wide range of enjoyable foods and beverages, including 22 brands that generate more than $1 billion each in estimated annual retail sales.

At the heart of PepsiCo is Performance with Purpose – our fundamental belief that the success of our company is inextricably linked to the sustainability of the world around us. We believe that continuously improving the products we sell, operating responsibly to protect our planet and empowering people around the world to enable PepsiCo to run a successful global company that creates long-term value for society and our shareholders. For more information, visit www.pepsico.com.