BAODING, China, Aug. 19, 2021 /PRNewswire/ — On August 18, GWM and Daimler AG signed an agreement on the acquisition of Daimler’s factory in Iracemapolis, Brazil under the witness of GWM Rotating President Meng Xiangjun in Sao Paulo.

The said agreement stipulates the transfer of the ownership of the Iracemapolis factory’s land, buildings, machinery and any other properties except for personnel to GWM. And it is expected to be done by the end of 2021. After taking over the factory, GWM will introduce advanced production, quality control, environmental protection and information management concepts that are in line with its global manufacturing standards, so as to build the factory into a smart production base catering to the demands of Brazil and other South American countries. At the same time, the factory will create nearly 2,000 jobs there, drive the development of local industries engaged in supporting, R&D and other services, promote the further transformation and upgrading of the local industrial mix, and contribute more profits and taxes to the Brazilian government. 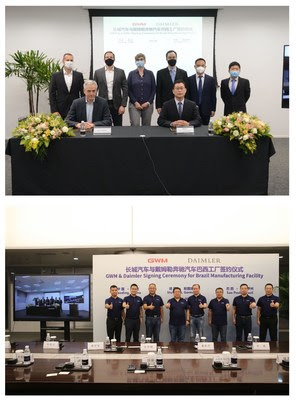 In fact, South America has served as one of the important strategic markets of GWM, which started to deploy in Chile as early as 2007, and has achieved remarkable results. The first PICKUP and HAVAL SUV models sold were popular among local users, which reinforced GWM’s determination to further venture into the South American market. Brazil tops all South American countries in terms of economic strength, land area and population, and serves as one of the seven largest automotive markets in the world, with immense potential for automobile consumption. In addition, GWM has taken Brazil as an important strategic market for enhancing its presence in South America, and it is committed to studying the preference of local consumers and changes in the automotive market. In this case, after acquiring the Iracemapolis factory, GWM will leverage the geographical advantages to advance its development and the implementation of its strategies in the South American market, benefiting local users with intelligent, safe and high-end travel experience.

Nowadays, GWM’s sales have been increasing amid COVID-19, which continues to hit international automotive markets. In the first seven months of 2021, GWM’s international sales rose by 176.2% year-on-year, which enhanced its confidence in globalization. The Iracemapolis factory, as an important base for exploring the South American market, further demonstrates GWM’s strategic ability to seek progress in adversity. In the future, GWM’s “global layout” is taking shape, with factories to cover China, Russia, Thailand, India, Brazil and other strategic markets and uniting the 500 sales networks worldwide. This will help to further expand GWM’s global presence, contribute to its ambitious goal of selling 4 million vehicles globally by 2025, and enhance its confidence and strength to “win the Chinese market and venture into the world”.