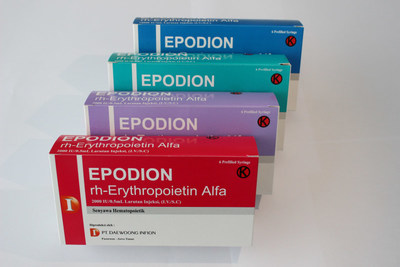 Epodion is an anemia treatment for dialysis patients with kidney failure and cancer patients, which obtained approval from Indonesian National Agency of Drug and Food Control (BPOM) in December 2016 and was launched in April 2017. Six months after its launch, the product has ranked 1st in Indonesia’s EPO market and currently leading with over 40% of the market share.

Based on halal certification, Daewoong Infion plans to obtain Halal certification for all products that are being produced in Indonesia, including Epidermal Growth Factor (EGF) and growth hormone-making Caretropine (Caretropin).

“Daewoong Pharmaceutical is aiming to enter the Middle East drug market, based on halal certification from Indonesia, the largest Muslim country,” said Chang Woo Suh, CEO of Daewoong Infion. “As a global healthcare company, we will do our best to contribute to improving the quality of life for many Muslims around the world by providing excellent and safe medicines.”